After posting a video of their doggy "daycare" bus, an Alaskan family dog-walking team has become an internet sensation. Mo Mountains Mutts, a husband-and-wife team, told FOX Television Stations that they never intended to start a business, but it "grew organically over time."

"I've always wanted a bus to transport my clients. I began on my bike, then moved on to a minivan, and finally to a large van. My big van's tire fell off in the middle of my route one day "Mo Thompson spoke up. "I posted a request on my local community page for a large van or a short bus. I was able to board a bus that had been stranded due to COVID." 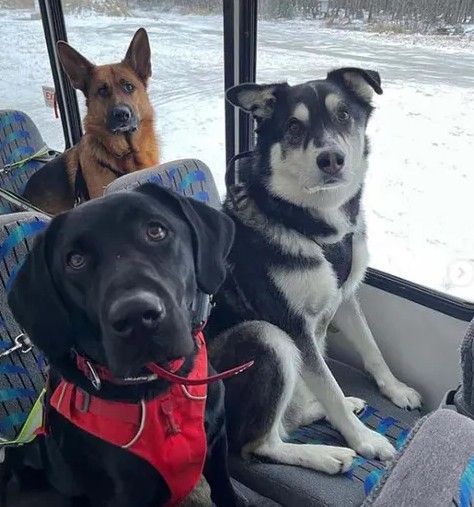 The couple, who also have an 8-month-old son named Vern, share videos on social media of their daily routines and operations in Skagway.

"My husband and I work well together, so we can balance work and our baby. This would not be possible if my husband had not agreed to participate "Thompson went on.

The furry friends are shown getting on their bus and finding their seats in a video that has already received over 50 million views on TikTok.

"Good morning, Jake," Thompson says in the video before the dog settles into a seat and is "buckled in" with a dog leash.

The couple runs their puppy bus all year. They also pet-sit on occasion.

"I hope it makes people smile," Thompson said at the end. "I also hope that it motivates people to exercise and train their dogs."