Emmy, a pit bull mix, was left outside and alone last week when temperatures plummeted below freezing. When her family abandoned her in Ecorse, Michigan, during a blizzard, the terrified senior dog had no choice but to curl up in a ball for warmth and pray that someone would find her.

Fortunately, rescuers found Emmy just as a little covering of snow fell on her fur. "She'd been outside for a day and a half in the severe weather," P.O.E.T. Animal Rescue board member Lauren Boesen told The Dodo. "It was probably two degrees Fahrenheit out there with 30 mph winds."

Emmy is now in the care of P.O.E.T. Animal Rescue, but her rescue was a collaborative effort with numerous agencies joining together to pick her up from her frigid position outside and transport her to a vet who could provide her with the medical attention she required. 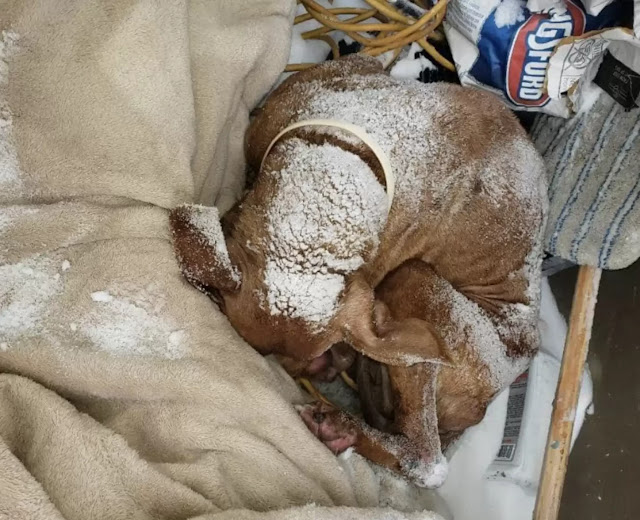 Friends of River Rouge Animal Shelter was the first to learn about Emmy and promptly put out a request for assistance on social media. After seeing the post, the director of a local spay and neuter facility, The PAWS Clinic, offered to drive the puppy to the vet. She took Emmy to Pet Care Clinic Lincoln Park, where a veterinarian staff examined her thoroughly.

"She was terribly malnourished," stated Boesen. "Everyone assumed she wasn't going to make it."

Emmy was underweight, flea-infested, and had pressure ulcers on both her elbows and knees. Her age was assessed by the vet experts to be approximately 8 or 9 years old.

"She was probably held in a cage for a very long time," Boesen added. "She certainly hasn't had a pleasant past." 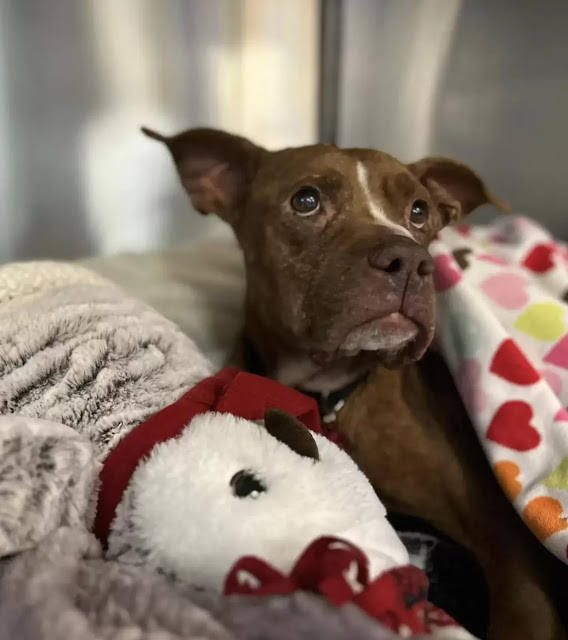 They determined Emmy needed to go to an emergency vet facility right away after having a closer look. That's when her P.O.E.T. Animal Rescue buddies stepped in.

"A few of our board members stopped everything to pick her up from the vet and drive her to the emergency clinic," said Boesen. "She was claimed to be curled up in a ball in the back of the automobile."

Emmy was in the hands of an emergency vet team just a few hours after being rescued from an icy roadway. Their objective was to raise her body temperature because she was still chilly and to treat her wounds.

The emergency vet crew had fallen in love with Emmy within minutes. 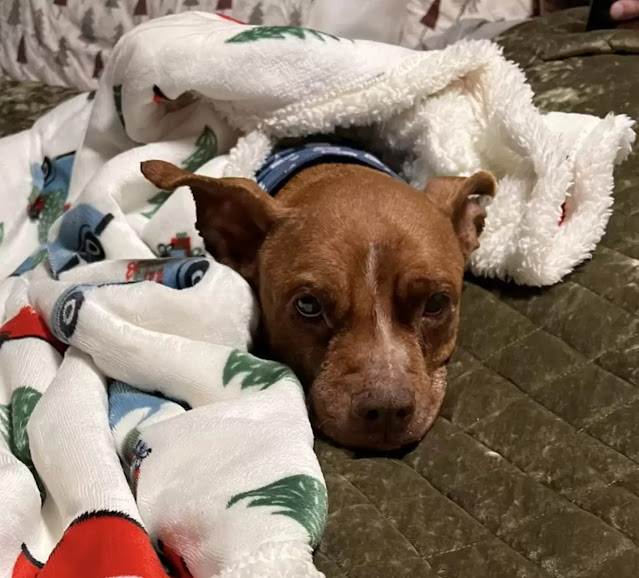 "They said she just brightened up and that she was the loveliest girl, and that she always greeted everyone that came in to care for her by wagging her tail," Boesen added.

Emmy's fever had stabilized by Saturday morning, and she was ready to be placed in a foster family. When Boesen arrived to pick her up, she was astounded by how much the pup's personality had developed in just 24 hours. 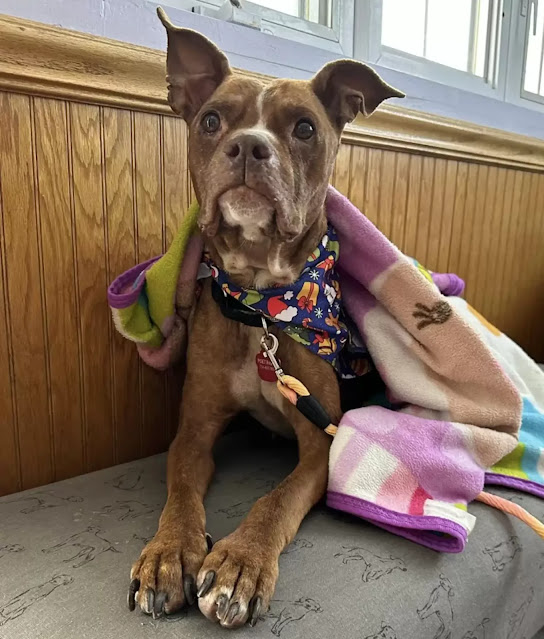 "She came out to the lobby wagging her tail," Boesen added. "She greeted us before wailing for other people in the foyer to pat her."

Boesen and Emmy stopped by P.O.E.T. Animal Rescue before driving to her foster home, where she immediately made herself at home.

"When I transported her to our shelter, one of the first things she did was crawl onto the sofa," Boesen explained. "I was taken aback." 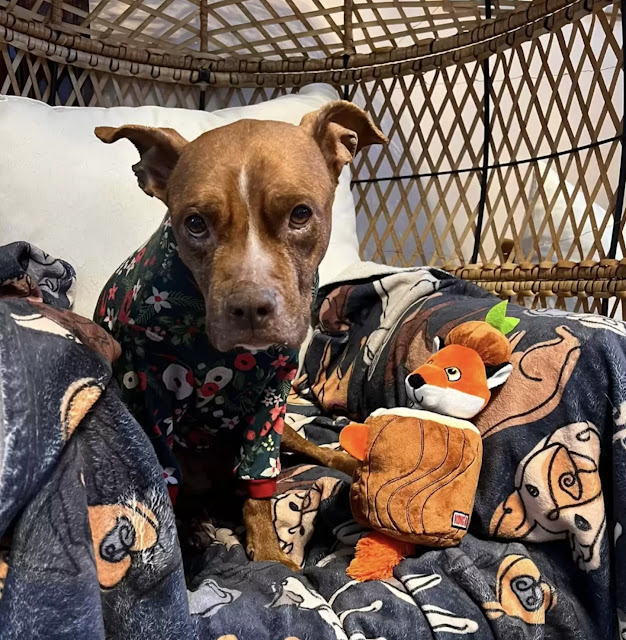 Boesen could see Emmy was ready for a loving home, and a seasoned foster family was eager to welcome her into theirs.

Despite the fact that her foster home is just temporary, Emmy is already receiving the affection she has always deserved. The surviving pup was snuggling behind a Christmas tree with her foster dog siblings two days after her rescue, wearing matching holiday jammies. 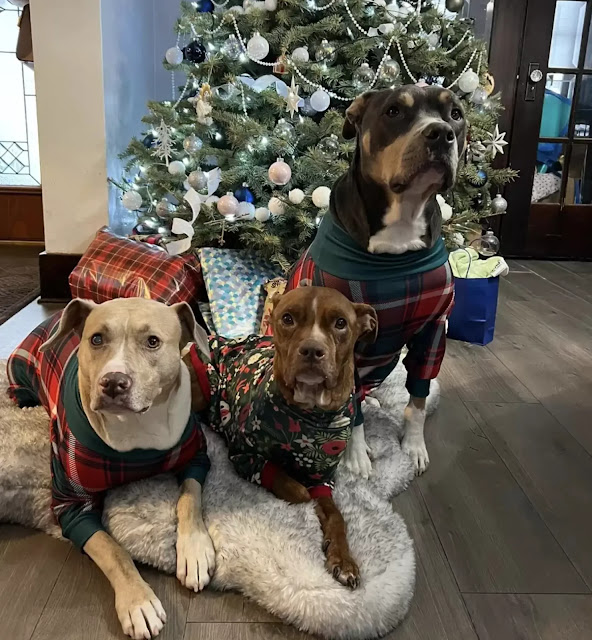 Emmy will be ready for foster care again in a few weeks, and Boesen hopes that her next family will be the one she remains in permanently.

"She's absolutely the sweetest girl," Boesen added. "She is deserving of the entire universe."