A horse named "Agripin" had been swimming in the waters of the Danube River when he noticed a dog drowning and in need of rescue. The small blind dog named Abby had tumbled from a nearby wharf and wandered far from the river shore. She was unable to make her way back to shore. So Agripin swam out to the small dog and offered her a lift back to land. 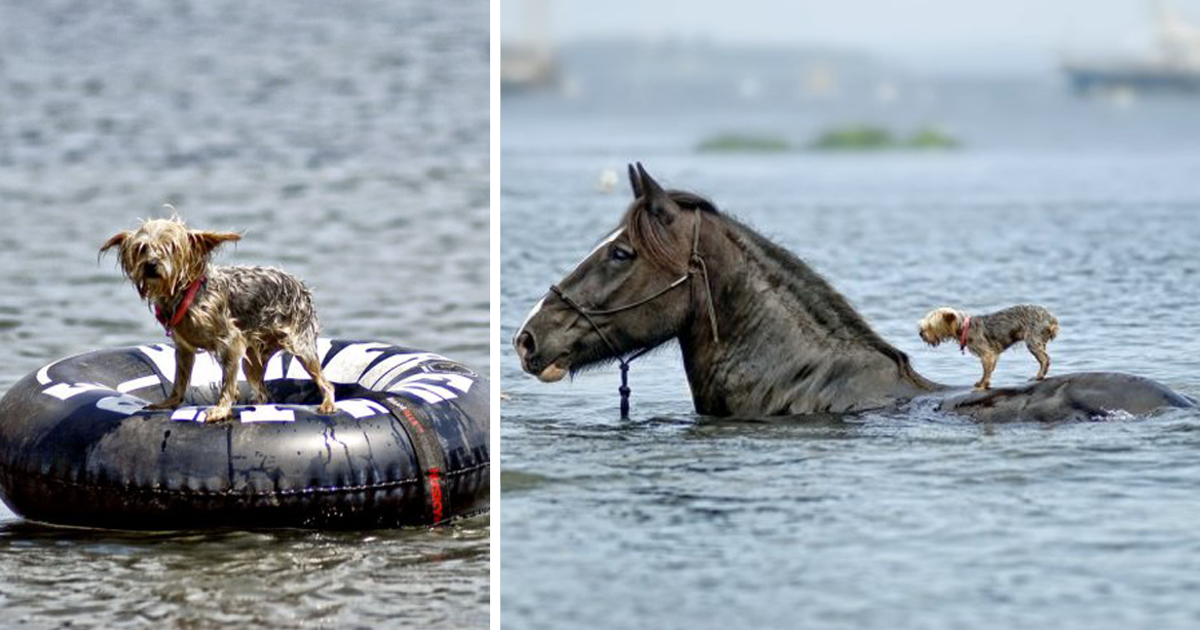 Agripin could stand up in the river because it was rather shallow. Abby got on Agripin's back and rode back to shore, sensing aid had arrived.

Agripin's aquatic rescue of the small dog astounded his owner, who was standing on the beach watching.

The following story is a fantastic rescue story, however it turns out to be absolutely false!

This photo and accompanying story went viral on social media a few years ago.

However, an animal lover on DogHeirs.com wants to let everyone know that the dog is not blind and wasn't saved by the horse. The two animals are close friends, the horse is named Brenda Lee and the dog is Lucy and their dad is Brian Sean Reid of Horses Know the Way Home. Jodie Sinclair, an equine photographer, captured the stunning image. The animals are found in the United States.

Sinclair really took some images of the dynamic pair swimming at the beach.

einsteinerupload of. Lucy is "the most independent, courageous, tireless tiny person I have ever encountered!" she said on Facebook.

The Facebook page Horses Know the Way Home also noticed that the photo has gone popular and is delighted by all the fake tales. They playfully quip, "How many lives would Brenda Lee and Lucy rescue together as a team, this Summer?"

Having fun with their dad.

They also find time to see their buddies!

Want to watch the couple in motion? Here's a video Reid provided of Brenda Lee riding Lucy around the fence at Tufts University.